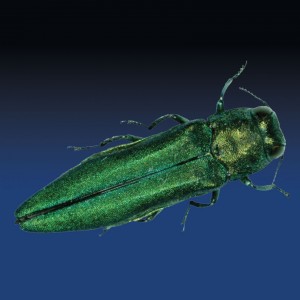 Emerald ash borer has been identified in Sioux Falls, SD!

Emerald ash borers were discovered in the Detroit area in the 1990s after arriving in the United States in shipping crates from China. In less than a decade, these insects have spread and killed millions of ash trees in Michigan, Indiana, Ohio, Pennsylvania, Maryland, Illinois, West Virginia, Virginia, Missouri, the Canadian provinces of Quebec and Ontario and now have reached Wisconsin, Minnesota, Nebraska, Iowa and South Dakota.

The adult emerald ash borer is a metallic green insect about one-half inch long and one-eighth inch wide. The adult female deposits eggs on the bark of ash trees. The larvae hatching from the eggs chew their way through the bark, and into the soft layer of wood just beneath. There, they eat their way through the tree’s vascular system, cutting off the flow of water and nutrients in the tree, leading to decline and eventual death of the tree.

Prevention is the key to success, however curative treatments are also successful if your ash tree shows minimal signs of damage.

Do you have Ash Trees in need of protection? Click here to request an estimate today!